This article and video first appeared on the Grant Makers in Health blog in September 2016.

Cities are increasingly turning to their “anchor” institutions as drivers of economic development, harnessing the power of these major economic players to benefit urban neighborhoods. This is especially true for cities that are struggling with widespread poverty and disinvestment. Urban anchors – typically hospitals and universities – have sometimes isolated themselves from the poor and struggling neighborhoods that surround them. But this is changing. Since the late 1990s, as population, jobs, and investment have migrated outward, these “rooted in place” institutions are becoming a key to the long, hard work of revitalization. In Cleveland, the Greater University Circle Initiative is a unique, multistakeholder initiative with a ten-year track record.

Cleveland has won national attention for the role major nonprofits are playing in taking on the poverty and disinvestment plaguing some of the poorest neighborhoods in the city. Where once vital university and medical facilities built barriers separating themselves from their neighbors, now they are engaging with them, generating job opportunities, avenues to affordable housing, and training in a coordinated way. Where once the institutions may have viewed each other as mere competitors for funding or clients, now they are allies finding ways to improve their surrounding neighborhoods, and cooperate on savings through joint business operations.

Ten years ago the Cleveland Foundation first convened the Greater University Circle Initiative. This has achieved coordination among three larger anchor institutions located in Cleveland’s University Circle area – almost one-square mile of world-class educational, cultural, and health institutions. Through this initiative, the Cleveland Clinic, University Hospitals, and Case Western Reserve University networked and deployed their resources in a powerful challenge to the persistent poverty and disinvestment in seven surrounding neighborhoods.

Where once a major institution might only seek to gentrify its surrounding area by pushing out impoverished residents, this strategy looks for ways to improve the prospects and income of the 60,000 people who live in these neighborhoods. The Greater University Circle Initiative seeks to reweave community networks, in part through community engagement, to improve the quality of life in surrounding neighborhoods, and to give residents a greater voice and connection to the resources of the anchor institutions.

The initiative includes other strategic partners, among them the City of Cleveland, neighborhood and workforce development entities, business accelerator organizations, and the evaluation partner, Cleveland State University. It is convened, supported, and led by the Cleveland Foundation. It focuses on building and sustaining the relationships of the partners and their commitment to meeting goals that they broadly identified as: Hire Local, Live Local, Buy Local, and Connect. I hope that the Greater University Circle Initiative – and the Economic Inclusion Management Committee (EIMC) created to support the work – can serve as models for effective, durable, anchor-based strategies nationwide.

An important tool was the Economic Inclusion Management Committee (EIMC) because it drove much of the day-to-day work of the Greater University Circle Initiative. Consisting of directors and managers from each of the participating organizations, this group is charged with implementing the goals, once they are determined by leadership. It began meeting in 2011, five years after the Greater University Circle Initiative formed. Its collaborative, patient work has resulted in new policies and practices within each anchor institution, as well as in new collaborative projects that are creating jobs, income, and ownership opportunities for residents. It is the networks and relationships resulting from all of these interconnected efforts that are the “glue” that holds the whole thing together. If there is a “secret sauce,” this might be it.

From 10 years of work, five critical elements account for the success of this anchor-based strategy: 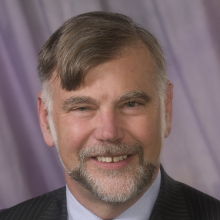 Robert E. Eckardt is Executive Vice President at The Cleveland Foundation, America’s oldest and third largest community foundation.  Working with the Foundation’s Board of Directors, he provides overall direction and supervision for grants totaling about $80 million annually.  He directly supervises ten senior program staff and provides overall supervision and administrative leadership for a program staff of more than 25.  He also serves as a corporate officer of the Foundation.