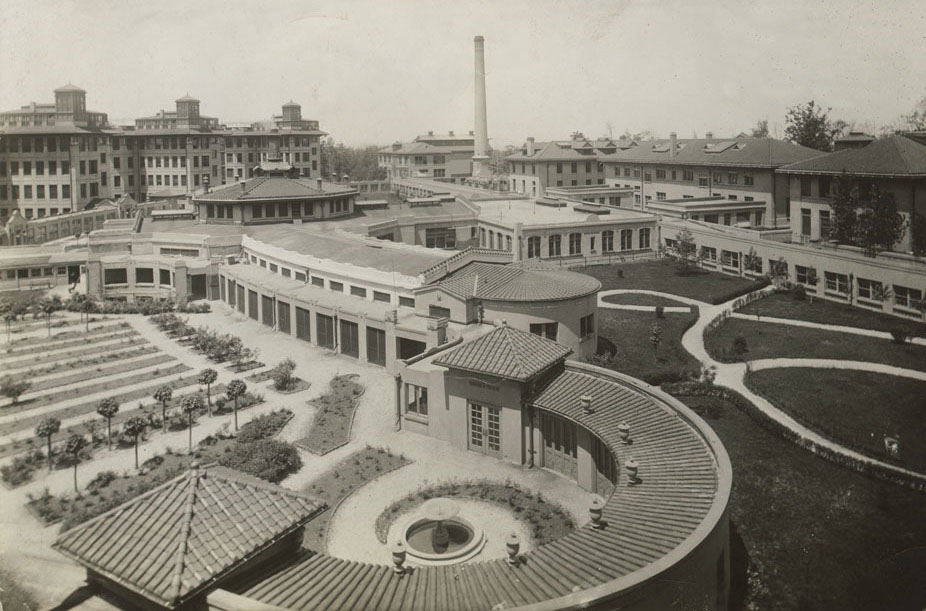 A hundred years ago at the height of the tuberculosis epidemic, New York City’s planners and public health establishment mobilized to develop what the New York Times called “…the largest and finest hospital ever built” for tuberculosis.  Operating in the absence of any known cure for the disease, the Sea View Tuberculosis Hospital’s medical facilities were, in a real sense, speculative and aspirational.  Tuberculosis (TB) had topped the list of causes of death in New York City for decades, and the call to action was urgent. 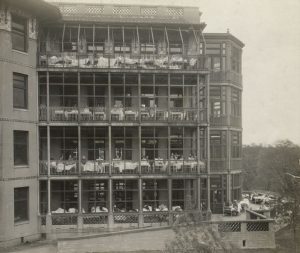 For the next 40 years, research and medical treatment were conducted alongside the general care of tuberculosis patients at Sea View.  Fresh air, sunshine, and a nutritious diet – all known at the time to have therapeutic effects on TB patients – were woven into the hospital’s design and provided patients with relief and, on occasion, recovery.

Indeed, until a cure was discovered, Sea View’s most therapeutic agents may well have been its location, site planning, and design.  Archival photos of onsite vegetable gardens, hiking trails, patient pavilions with balconies, and social gathering spaces all read like an early manual for what planners today call “Active Design” and presaged the 21st-century distillation of core Healthy Community goals: physical activity, fresh local food, access to nature, and sociability.  Then, in the early 1950s, doctors at Sea View began clinical trials of hydrazides.  That drug famously led to the widespread cure of the disease, and is now part of Sea View’s public health legacy.

With TB largely resolved, large segments of the campus have now gone dark or been put to other uses.  But a new epidemic plagues New York City and, indeed, the rest of the country: chronic disease.  Like TB before them, heart disease and cancer have been topping the list of causes of death in the US for decades, with diabetes close behind.  And while medical advances continue apace in the treatment of these diseases, there is a growing sense that we will need to search outside the halls of medicine for a cure.

Local data underscore the point.  Local hospitals at and near Sea View are highly-rated, comprehensive, and accessible to a population with relatively high rates of insurance coverage.  And yet, the borough has the highest death rate overall, as well as the highest rates for diabetes, cancer, and heart disease.  When NYC planners convened to discuss the future of the Sea View campus, a demand analysis was commissioned to inform a subsequent site plan that would feature those medical facilities for which demand was identified. The data showed the local population to have the city’s highest mortality rate (747.5 deaths per 100K population cf. national average of 724.6) but, according to the Centers for Disease Control and Prevention , among the lowest need for additional medical facilities (150.5 primary care physicians per 100K population, cf. national median of 48). There is clearly a disconnect between the accessibility of medical care and health outcomes.

So, if not medical facilities, what does a healthier Staten Island need?

Learning from the Past

An answer may be found in the historical Sea View which, in the absence of a known cure for TB, designed its campus to facilitate delivery of the known therapeutic agents of fresh air, sunshine, nature, and fresh local food.  Perhaps a healthier Staten Island simply needs community design that is more focused on health.

A government study cited in Active Living Research last year references a 30% across-the-board reduction in premature death for the physically active.  A study in Environmental Health Perspectives cites a 12% lower death rate for those living in greener environments.  Perspectives on Psychological Science published a study showing a 20% higher mortality rate for people who are socially isolated.  The combination of such environmental factors quickly adds up to being the single largest determinant of a population’s well-being.

City environments lend themselves to things like farmers markets and parks, to walking and biking (even if only to the bus or subway), and to the sociability born of dense urban fabric – all activities that research shows to have positive effects on health and have a significant preventative effect on chronic disease.  However, while it is part of the nation’s largest city, Staten Island more closely resembles the rest of America: suburban, car-oriented, and segregated land uses.  Its development patterns necessitate driving – to work, to eat, to the store, to the park – exacerbating modern tendencies to be sedentary and solitary.  Small wonder that Staten Island is New York City’s ‘hot-zone’ for chronic disease.

Where we live – and how we live there – can determine the fate of our health, but it is only recently that communities have started to seriously consider health in the process of how we develop buildings and neighborhoods, let alone contemplate projects where health is the actual impetus for development. 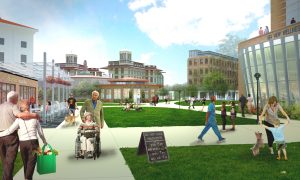 New York City is about to take that step with Sea View.  The nature of chronic disease is in some ways antithetical to a sense of urgency, but in statistical terms, today’s epidemic is no less dire than that for which Sea View was originally built.  And so New York City is again answering this call to action, mobilizing its substantial land and capital resources to address this public health threat with partners from the development community.

It released a Request for Expressions of Interest (RFEI) in December for what may be the largest public health facility in the City’s history: a neighborhood.  (Click here if interested!)  The old tuberculosis hospital will be redeveloped into a health-focused, mixed-use master planned community.  Nestled within the Staten Island Greenbelt (2,800-acre linear park system with 35 miles of hiking trails), Sea View is located in the City’s hot-zone for chronic disease but is also endowed with the best weapons to fight it.  It offers the city’s largest remaining residentially-zoned parcel (80 acres), immediate access to expansive natural preserves, and a blank canvas for use-mix and infrastructure to optimize lifestyles which prevent and combat chronic disease.

It is a bold step.  Indeed, when has a city ever undertaken a public health-inspired development initiative at this scale?  Only once that we know of: a hundred years ago – at Sea View. 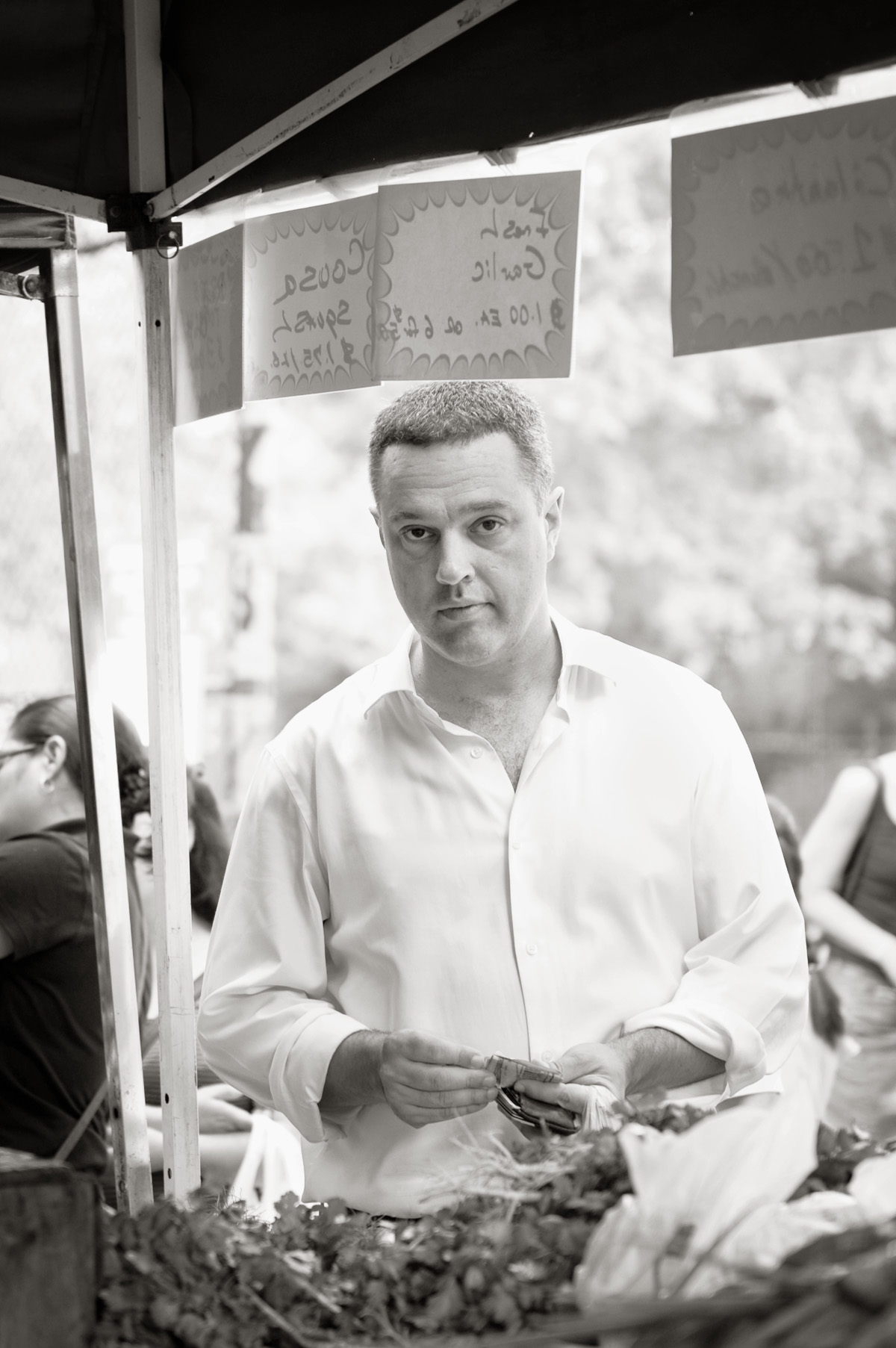 Munro W. Johnson, AICP, is a vice president in the development department of the New York City Economic Development Corporation where he focuses on a range of projects in the City’s “forgotten borough” of Staten Island.  Previously, he worked for the Norwalk Redevelopment Agency in Southwestern Connecticut where he focused on waterfront redevelopment and transportation/connectivity.  In both jobs, his work eventually led him to the intersection of planning and public health.  Munro came by his interest in development living in an eclectic mix of places in his life, including Seattle, Wyoming, Vermont, Ohio, Osaka, Philadelphia, suburban Connecticut, and finally, Queens.  He holds a bachelor’s degree from Oberlin College, and a master’s degree from the University of Pennsylvania.