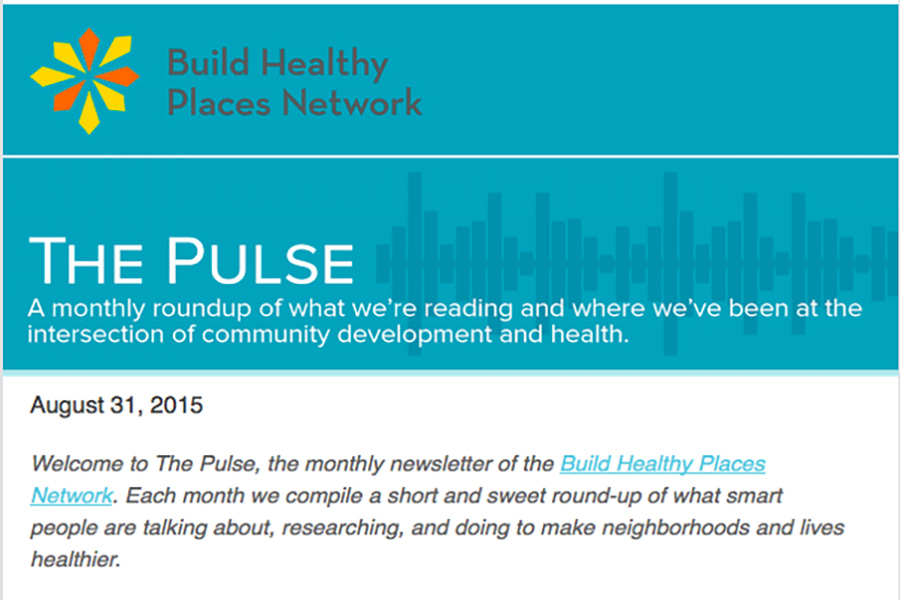 Welcome to The Pulse, the monthly newsletter of the Build Healthy Places Network. Each month we compile a short and sweet round-up of what smart people are talking about, researching, and doing to make neighborhoods and lives healthier. Click here to receive The Pulse in your inbox.

Network news: Wow! More than 200 people signed up for our second #NetworkCommons, where public health experts linked neighborhoods to their work. Highlight reel here. A post from our own Renee Roy Elias, “Community Development Moves the Needle on Health Equity,” sets the stage. And Jessica Mulcahy of Success Measures reminds us why involving the community is so important: We’ve got to ask the right questions to get the right answers.

Check out the first in our new long-form journalism series. In “A New Generation of Affordable Housing” we meet developers in Arizona designing housing that improves the mental and physical health of “grandfamilies,” in which grandparents are raising their grandchildren. The secret? A holistic definition of health.

Poverty, neighborhoods, and health: “Poverty is a massive public health problem.” Michael Rubinger, the CEO of LISC, put it succinctly in an email to followers. Our own Colby Dailey says his statement “is profound.” Find out why.

In the New York Times, David Kirp highlights Houston’s Neighborhood Centers Inc. in “What Do the Poor Need? Try Asking Them.” Instead of telling poor neighborhoods what’s wrong with them, NCI promotes well-being with a bottom-up approach. “We go where we’re invited and do what we’re asked to do,” says Angela Blanchard, the group’s CEO. Find out more about their holistic approach to improving neighborhood well-being.

Also, can San Francisco’s Tenderloin neighborhood survive that city’s intense gentrification pressures? Rick Jacobus, in a Shelterforce Rooflines post, argues that preserving affordable housing—in this case the 25 percent of Tenderloin housing stock that is owned by nonprofits or has subsidized rents—might be a unique “vaccine” against gentrification and a model for other neighborhoods.

And this past week marked 10 years since Hurricane Katrina. Public radio’s Marketplace reports how the Bayou District Foundation in New Orleans is rebuilding a neighborhood by turning once notorious public housing into the thriving community of Columbia Parc.

People or place, move or stay: Thomas Edsall’s New York Times op-ed ignited a debate on how best to address concentrated poverty. Solomon Greene and Margery Austin Turner respond and Robert J. Sampson offers good insights. And, putting a coda on the debate, the Times asks how easy is it, really, for families to move? A Brookings discussion series argues for a “place-conscious approach”: It may be about the neighborhood, but that does not mean all the action has to happen in the neighborhood.

Dig in: From the Aspen Ideas Festival: When “Defeating the Zip Code Health Paradigm., technology, data, and collaboration are key. And the Stanford Social Innovation Review series on community health discusses the importance of a holistic approach. #SDOH

Consider: We are dismayed to see the grim growth of concentrated poverty in several U.S. cities. But in better news, the Institute of Medicine hosted a meeting on how best to evaluate community health initiatives, especially important since the institute is looking across sectors to find good options.

Map: The new Child Opportunity Index maps make it possible to discover children’s well-being by census tract in any of the country’s 100 largest metro areas.

Quote of the month: “Everything that community development touches has a connection to one of the determinants of health.” —Julie Willems Van Dijk, co-director of County Health Rankings & Roadmaps.

Listen: Upcoming online events include Hospitals in Pursuit of Excellence’s webinar on the importance of community development for health, and the first installment of NeighborWork’s “Healthy Homes and Communities” series.